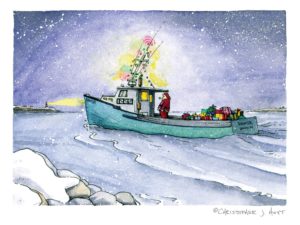 The Landings Obligation – No Simple Answers

On Monday, 2 December 2019, the PECH (Fisheries) Committee of the European Parliament organized a public hearing on State of play of the Landing Obligation: challenges and best practices (https://www.europarl.europa.eu/cmsdata/189086/Final%20Programme%20PECH%20public%20hearing-Landing%20Obligation_2.12.2019.2_EN-original.pdf).

During the previous session of the Parliament, just over 18 months ago on May 14 2018, the PECH Committee organized a similar hearing entitled: “Landing Obligation and Choke Species in Multispecies and Mixed Fisheries”. In summing up, the then Chair of the PECH Committee, Mr Alain Cadec, commented: “…the diagnosis is very clear: uncertainty, difficulty, complexity…”.  Plus ça change… https://lifeplatform.eu/choking-landing-obligation/

A key element of the 2013 reform of the Common Fisheries Policy (CFP) of 2013 is the gradual elimination of the practice of discarding through the introduction an obligation to land all catches. The landing obligation (LO) is supposed to have been phased in since 2015 through to 2019 for all commercial fisheries (species under TACs, or under minimum sizes) in European waters and for European vessels fishing in the high seas.

However, a thread running through the presentations of all the speakers at this hearing was that, at Member State level, the LO is not being implemented effectively. Former fisherman Jerry Percy, LIFE’s Senior Advisor and Director of the NUTFA (New Under Ten Fishermen’s Association of the UK) was one of the speakers. His presentation is available here, and drawing on his experience in the UK, he has penned the piece below for LIFE.

The LO: designed for trawlers, not fit for purpose for small scale low impact fishing

It is abundantly clear that the Landings Obligation [LO] was written very much with larger scale mobile gears in mind. Just one illustration of this concentration of interest is underlined by the massive difference between discard related studies done with regard to larger and smaller scale sectors respectively, 3760 on large scale v 164 on small scale. This does make the requirements of the LO clearly inappropriate and therefore not fit for purpose with regard to the small scale fleet, especially as circa 80% of whom use passive rather than mobile gears.

The combination of a relatively low impact on stocks due to both vessel size and the resultant lack of fishing power, combined with their use of passive gears, many of which produce a live catch that can be returned unharmed to the water does provide a strong argument against tarring them with the same brush as the larger scale sector. Furthermore, the small scale sector should in fact be recognized and rewarded for this lower impact and lack of discards via the provision of additional fishing opportunities best delivered via Article 17 of the CFP. This states that “Within the fishing opportunities allocated to them, Member States shall endeavour to provide incentives to fishing vessels deploying selective fishing gear or using fishing techniques with reduced environmental impact, such as reduced energy consumption or habitat damage.”

The strategy to deter fishers from discarding, and the LO, need a rethink

At the same time, there remains a commitment by member states to deal with the discard issue and it is still a live element with both eNGO’s and the public so as an industry we cannot simply ignore it, it’s not going to go away anytime soon.

The current failures of the LO are largely down to two major factors.

Firstly, that there has been precious little genuine monitoring or enforcement of the LO since its inception. This is exemplified by a recent comment from an official at the UK’s Marine Management organization (MMO) that 2018/19 was seen as an ‘education’ rather than an enforcement phase.  Furthermore, despite the LO being in place for the Baltic since 2015, it is common knowledge, including within the member states concerned that discards continue to run at over 50% for some species. On this basis and with very little real time monitoring or enforcement of discards it is hardly surprising that fishermen continue to dump fish.

Secondly, it is equally clear that there has been much excellent work done to improve the selectivity of mobile gears in the last few years and discards in general have reduced significantly for many fisheries. The fact remains however that discarding is still extant within the mobile sector, there is a legal requirement in place that makes discarding illegal [whether we like it or not] and both carrots and sticks are necessary to encourage and support fishermen to change their culture as well as their fishing gears if discarding is to be reduced to the lowest possible level. Among the number of ‘elephants in the room’ referred to by various speakers at the recent hearing at the European Parliament on the subject, one that was not mentioned specifically was the fact that mobile gears are not inherently selective in the same way as passive gears, hence the seemingly insurmountable challenge of making them substantially selective.

It is also a fact that the leading gear technology expert certainly in the UK and probably the EU stated recently that his challenge was not only to develop more selective gears but it was an equal struggle to persuade fishermen to actually use them. Perhaps not surprisingly, some of the more selective gears inevitably lose some of the target species when trying to avoid other fish, hence the reluctance of some mobile gear operators to change their ways but change their ways they must to avoid breaking the law and also to avoid going bankrupt through being stopped from fishing in a choke species scenario [bearing in mind not only the zero catch quotas for 2019 for some species in some areas also but the parlous state of North Sea Cod that is shaping up to be a potentially major choke species for many vessels].

[1]: at the present time, cameras [REM] are the only reliable way of monitoring discards aboard fishing vessels. It is certain that technology will improve with time, but currently, cameras are the most cost effective and proven option.

[2]: All mobile gear vessels over a certain length [12 metres? / 15 metres?] as well as the larger passive netting vessels should be required to have cameras and perhaps other REM fitted, paid for via EMFF and its successors [as well as perhaps via any financial penalties incurred through overfishing].

[3]: As is currently the case, uplifts in quota should continue to be awarded to vessels to compensate to some extent for no longer being able to discard.

[4]: ALL fish caught must be landed

[6]: Fishermen are not penalized via their quota holdings for over quota landings [it is counter productive to reduce quota following a transgression that in turns means that the fisherman is further restricted on next trip and so on]. NB; the current inability of the under ten sector in the UK to be able to cross book [swap] quotas is a serious impediment to quota and catch flexibilities currently only available to the over ten PO sector [despite having an officially recognized Coastal PO for the under tens]. In the light of the LO, this is an absolutely vital component within this aspect of the initiative.

[7]: a sliding scale is introduced relating to the penalty for landing fish in excess of the vessel quota. Firstly, the value of the over quota landing is immediately subtracted from the overall landed value of the trip and secondly, a sliding scale of penalty directly related to the weight [or a percentage of the landing] is imposed. The initial suggestion is for the penalty to equal the value of the over quota element of the landing [ie, landing £1000 over quota results in £2000 overall penalty] but consideration should be given to a sliding scale, perhaps based on the premise that the more you land over quota, the higher the penalty, thus ensuring that a landing does continue to provide an income irrespective of size of vessel but is at the same time reduced and penalizes those who have a greater impact through catching fish in excess of their quota. The bigger the over quota landing, the bigger the penalty.

The basic premise being that the fisherman does not benefit financially from landing these fish and increasingly is penalized for doing so, especially if he repeats the overfishing whereby financial penalties should increase.

We recognize that not penalizing fishermen in quota terms for landing over quota fish goes against fisheries management logic but history suggests that this is in fact counter productive as the resultant reductions in access to quota generates a downward spiral as less quota equals more ‘discards’ and simply doesn’t work. The suggestion above recognizes that there will be an element of over quota landings initially but the penalties, especially if they are based on a progressive sliding scale, will provide more than enough encouragement for fishermen to avoid ‘discards’ very quickly. [at the same time, a backstop could be introduced based on a reduction in a vessel’s quota allocation to ensure no overall abuse of the system in the event of very significant or continuing over quota landings, perhaps aimed at the quota uplift element].

The approach outlined above also solves the problems highlighted by many commentators, namely that there will be no need to separate the catch on board, there will be no additional work required by the crew, no danger of cross contamination, no need to carry extra boxes and an overall improvement in safety over the present model. At the same time, there will no need for additional resources on land in terms of systems to deal with landings not destined for human consumption and no opportunities for illegal activities centred around the misuse of this element of landings.

No fishermen likes to consider, let alone promote a form of penalty for the process of fishing but our concern is that unless the industry comes up with some ideas then officialdom surely will. Although there will undoubtedly need to be alterations to the basic initiative set out here especially with regard to the percentage penalties, the potential sliding scales mentioned and a backstop, we consider that the basic premise is sound and that the current approach to the LO is simply unsustainable and we urgently need to find a practical alternative to avoid either bankrupting fishermen or forcing them into illegal activities.