LIFE in the Advisory Councils

LIFE in the Advisory Councils: Foot in the door, but more seats at the table needed.

Too set in their ways, small-scale fishers find that Advisory Councils are resistant to change.

2 October 2017. Meeting in Hamburg Germany, around 30 small-scale, low impact fishers from Sweden, Denmark, Poland, Germany, and Netherlands, shared experiences and lessons learned from their engagement with the Advisory Councils (ACs). They were joined by technical experts and academics from the Baltic region, and supported by LIFE staff.

Under discussion were the “nitty gritty” of how ACs function, in theory and in practice, the experience of small scale fishers of engagement in the ACs, and what needs to be done to make negotiations and decision taking more open to including issues of importance to small-scale fisheries (SSF).

The Regional Advisory Councils (RACs) emerged from the 2002 reform of the Common Fisheries Policy as stakeholder led bodies, designed as a vehicle through which fishers, vessel owners, trade unions, processors, traders, consumer groups, NGOs, fish farmers and others could feed their views and recommendations into policy making processes at EU level. Under the 2014 CFP reform the RACs were revised and renamed “Advisory Councils”, with the aim of ensuring a wider and more balanced representation, with an emphasis on small-scale fleets, in line with the new objectives of the CFP. By the time of the 2014 reform, most of the RACs had been operational for a decade, but without the participation of organizations dedicated to representing small scale fishers.

Recognizing the need to be at the negotiating table if you want your voice to be heard, it has been a priority of LIFE to encourage and facilitate the participation of SSF in the ACs since its launch in 2012 at the first European Artisanal Fishermen’s Congress. However, it is only in the last 12 to 18 months that LIFE has been able to provide the necessary support to its members to enable them to participate in the ACs, mainly through its Baltic and North Sea and Mediterranean Coordinators.

A big challenge has been to break the mould of decision taking in the ACs, dominated as it is by the interests of larger scale fishing (LSF) interests, processing industry, retail sector, and others. LIFE has found considerable resistance to change the status quo, and especially for its members to get elected on to the Executive Committees (ExComs) of the ACs, where decisions are made. The exceptions have been the Baltic Sea and the Market ACs, where some inroads have been made to putting issues of concern to small scale fishers on the agenda.

As emphasised by Wolfgang Albrect from the Fischereischutzverband Schleswig-Holstein in Germany, recently elected on to the ExCom of the Baltic Sea AC (BSAC) “things look good in theory, but in practice it is very important for active fishers to be present in the ACs. This requires a considerable effort, both to prepare for the meetings, and then to be there personally. As a fisher, you have to reflect whether it is more important to spend 2 days fishing, or to be in the ACs to try and make more fish in the sea. We have been through the first hurdles, we have our foot in the door, but we do need more fishers at the table.”

Katarzyna Wysocka from the Środkowopomorska Grupa Rybacka in Ustka, Poland, highlighted that the majority of fishers had to learn a new language when joining the ACs, to understand the meaning of many new terms and concepts, and the significance of ICES advice, MSY, Ecosystems Approach, Landing Obligation, and to interpret for other small-scale fishers. “The job is not over by just being there. Larger-scale operators work hard to get what they want. We have to do the same. But there are constraints. In particular, most of us do not speak English, and the ACs say there is no budget for interpretation*.” 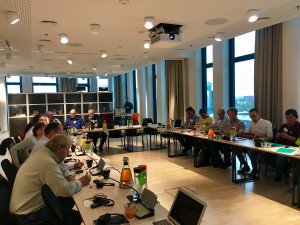 It was also noted that up to now, the CFP has “lacked local roots”, and it was recommended that SSF should form alliances with local municipalities to promote “quality over quantity”, and to ensure that small ports were kept open. The importance of SSF in providing local jobs and local supplies of quality fresh fish was highlighted, compared to providing high volumes of fish for the processing industry. “There is simply not enough cod in the Baltic sea to provide for the needs of the processors, or enough fish to support the fishmeal industry. Greater emphasis needs to be given to supplying low volumes of high quality fish to local consumers, tourists and restaurants”.

Looking to the future, and how to make ACs and decision taking processes more open to SSF, the new legislative framework which allowed for greater SSF participation was welcomed. But more needed to be done outside the ACs to bring issues to light that are not possible to discuss in the ACs, including how to solve the conundrum of trawling and the landing obligation – the “blue whale in the room”. Many participants also expressed frustration over the implementation of Article 17, intended to reward selective, low impact fishing, but which had been a “disaster”. The language was too vague, and the provisions easy to circumvent.

It was also highlighted that the constant push by the LSF to obtain ever greater quantities of quota worked both against the sustainability of the fish stocks and the interests of the SSF. With ITQs, SSF was vulnerable to losing access, and there was a need to ring fence fishing opportunities (quota and reserved fishing areas) for SSF that could not be transferred to LSF.

Despite the large amount of work still needed to be done to redress the imbalances between LSF and SSF, participants were optimistic about the future. The ACs were providing a useful tool to inform policies, but they were not the only tool.

* This comment refers to a past practice within BSAC, which has recently been changed upon LIFE Members’ request. Since 2017, a service of on-demand whispered interpretation has been included in the BSAC budget.